The all purpose forum for any TR7/8 related topics.
Post Reply
24 posts

Does anyone know what this item is please, it was not on my original harness but is on the replacement? Noise suppression for the radio at a guess.

Its a diode (for those who don't know what a diode does it is a semi conductor which allows current to easily pass one way through it, but it restricts the flow back the other way)
As to what it's doing there....... I don't know, but if you were to look at the wiring diagram, the approximate location and the colours of the wires connected to it should give a clue.
"Keep calm, relax, focus on the problem & PULL THE BLOODY TRIGGER"

Being on a black/ white wire and located on the facia harness it would suggest that it is on the handbrake circuit however that would be a little strange and as the previous main harness/ facia harness does not have one I am thinking that it maybe a US/ Federal spec item only?
Top

I don't think that's right....I have the hand brake circuit using black/purple wiring.
The heated rear window circuit uses white/black wiring. As to what it would be doing there..... a guess is; given that the resistance would very as the heater warms up, it might be there to automatically shut down the feed to the rear window heater.
Other than that the only other reason I can think of for it being there would be to prevent either this circuit or some other circuit back earthing through each other.
As such it could even be someones clever fix for a tricky back earthing problem they had on the donor car.

I've been through the manuals and unsurprisingly they offer very little information, they would have to be among the worst written manuals of all time.
"Keep calm, relax, focus on the problem & PULL THE BLOODY TRIGGER"

Looked up the part#, even found some alternative part# but none of these feature it the TR7/8 parts catalogue........not that that would mean much!
I can tell you it is a 1amp diode and is used in many applications and different cars including the Deloren, which apparently has 6 of 'em the scatted though the car.

Here is a circuit diagram I found for a Land Rover where it is used for the rear window heater: 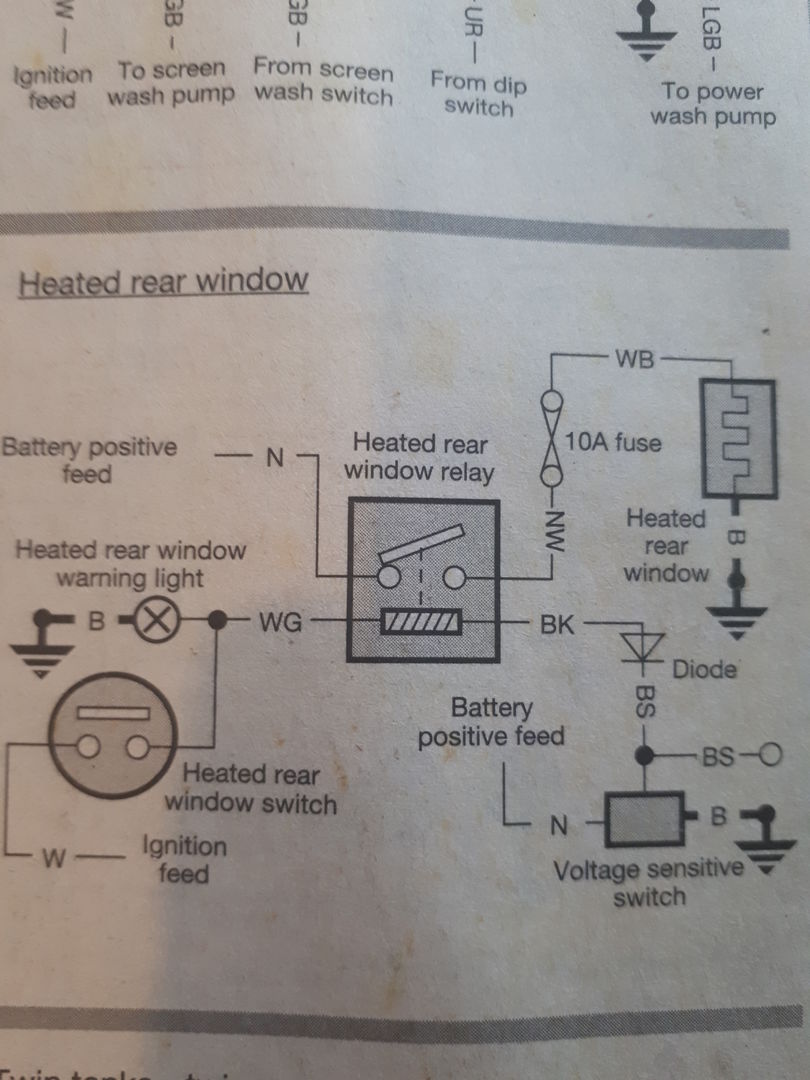 I think that this is an odd way to go about this. Maybe to shut this and other circuits down to conserve the battery when the volts drop below below a certain point.

Thank you cobber, the handbrake cable is definitely purple and black on my loom also. I will discard it as I am only using the facia harness, and not the the main and cabin harnesses so will revert to spec. Interestingly when it is connected the choke and brake light clock/facia lights illuminate when the handbrake is applied. If its not a TR7 item then there is little need to keep it.
Top

My MGB developed a fault whereby using the handbrake activated the starter whilst the engine was running.This was caused by a failed diode similar to this.An MG specialist said he had never seen one,maybe keep it safe and note its position.Steve..
Top

Good idea, will do.
Top

In my DHC the white black wire for the heated rear window ran to a blanked off connector block behind the switch panel. (Basically factory sticky tape wrapped around it) It then ran to the back of the cockpit, (again more tape) as there's no hrw on a DHC

It was useful. When converting to V8 I used it to power the electric fuel pump I placed behind the rear bulkhead. The diode is still in place behind the dash. MG's and Defenders IIRC have one similarly fitted to the hrw feed. It stops the hrw draining the battery when it's switched on and the ignition's off?
Top

Once again thank you for the detail. The update is that everything is now working correctly apart from the headlamp motors, which are taking a frustratingly amount of time to correct, (the lights work and flash but no motor lift).

Unfortunately my thinking that replacing the loom with a brand new Autosparks loom would be an easier option than just replacing with a secondhand item was flawed. The Autosparks loom has disappointingly not been a straight swap and was supplied with multiple faults, in fact four individual looms were ordered (main harness , body harness, gearbox and boot light) 3 of which actually would not connect to themselves due to having different connectors on them, which is just bewildering and underwhelming, and the errors do not stop there.

Currently I am systematically working through with the help of Howard_B's excellent wiring diagram but it is looking a little more in depth than first thought.
Top

Somewhere in the dark distant past I sat down and figured out exactly how the bloody complex headlight system works, I posted the explanation on this forum.
I suggest a look back through the archives to try and find it, the search will be worth the time it takes to do it.
And regardless of the current cause of your headlight problem, I highly recommend you fit relays to the lights themselves to protect the weak as piss light switch.
"Keep calm, relax, focus on the problem & PULL THE BLOODY TRIGGER"

The ongoing scenario of trying to make this new Autosparks harness work, everything works fine, lights, hazards, horns etc etc. The headlamps flash correctly (now) however when switching on the headlights the pods do not raise, the headlights are on, main beam, dipped beam but no pod action.

I have checked all the circuits and the current/ voltage is good at the main switch and the flash switch, voltage is present on the pods down circuit but no current on the pods up circuit. All connectors are fully home, relays checked and as it is a new harness I am suspecting something is not right on the harness (not the first time, so far a list of faults). If you apply the power-probe to the pod up circuit then the pods continually cycle so it is definitely an issue with current/ voltage. Any ideas?
Top

There is a little box of tricks which acts as a delay to the lights lowering so as you can flash the lights, it's often referred to as a Pektron unit ( after the maker Pektron.) I suspect this could be the source of your woes. It lives in the dash.
Do a search through the archives on this forum, I did a write up on how the headlight wiring circuit works.
"Keep calm, relax, focus on the problem & PULL THE BLOODY TRIGGER"

Hi Cobber, thank you. I can confirm that this unit is functioning correctly, we have a full flash function that works fine. It is only when you turn the main lights on that the pods do not operate but the lights work fine. All very strange, all voltage/ current is as per normal with the exception of the signal to raise the pods at the relay. the down signal is present and also moves to zero voltage when the main switch is operated, however there is zero up signal voltage.
Top
Post Reply
24 posts