I am restoring my TR7 DHC

The all purpose forum for any TR7/8 related topics.
Post Reply
41 posts

I am restoring my TR7 DHC

Hi to all.
My Name is Rod I have been a member for over 12 years to the best of my memory and theses days its not that good.
I had to rejoin because i couldn't find my old password and user name. I would like it back pleases help if possible.
Looks like there is not much activity here any more so I would love to hear from any one still posting, will continue to post my car and work as i go.
cheers
Top

Hi, not sure if you tried your old username and password but as far as I know they were carried across from the old forum to the new one. I think old posts can still be found with the Search function (sure I have found some of my old ones before). The forum is run by Christopher Kenneth Smith so he may be able to help if you contact him.
Unfortunately most people seem to use Facebook these days so it is advisable to join the 'Triumph TR7 Owners Page'. Some of us still post on here (or duplicate any tech stuff so that it can be found again unlike FB).
Good luck with the restoration.
Alan
Saab 9-5 2.3t Vector Auto Estate Stage 1
Saab 9-3 2.0 SE Turbo Convertible
'81 TR7 DHC

Yes things have changed. I don't think many of us are still using 7s as daily drivers, so no where near as many miles finding little faults, those who still have them don't use them as much, & many have moved on.

I made the mistake of a full bare metal paint job, & then became upset when this was damaged in car parks or on our country standard roads. I no longer use the car for shopping for a few groceries or some hardware, so she doesn't get out much.

My son tells me there is no point going to my grave with a pristine & beautiful TR7 sitting in the shed. Better to have a worn & battered 7 that has been used & enjoyed to the end.

I look forward to hearing of your adventures as you do yours.

I don't use mine during the winter (just above freezing with it often cloudy and some times rain) and mostly I just use my 2013 Volt (EREV). In summer I go to car shows and the occasional British car club outing (OECC). This Fall (September) I took my car on a 3,000+ mile journey to Portland ABFM (Oregon) where I was the only TR7 in the 500 car field (down a 100 I would say because the entry fee went up from $35 to $50 although you also get to watch a weekend of 50's/60's/early 70's car racing and being moved from Labor Day Holiday weekend to the week end after because Indy car racing came back to the track and displaced it to a week later). Despite the TR7's being joined together with the TR8's for judging (the first time in years) they awarded my "first prize" ribbon anyway either because they wanted to encourage more TR7s to turn up or I got first prize anyway and they wanted to keep the TR8s separate so there was a first prize for them (it's happened to me before) or somebody whispered in their ear that it's not fair to judge TR7s with the TR8's because people often judge their preference of a V-8 (it's a peoples choice judging).

On down to Santa Maria, California for the Triumphest 2019, I won long distance award, an embossed medallion with a bottle of wine (1,350 miles), Gold Plus plaque, best TR7/TR8 plaque awarded by the Wedge Owners of America (TWOA), no easy feat as 8 out of the 13 wedge entries were Gold or Gold Plus winners, the highest percentage of any other model.

From there I went down to Ventura to visit nephew, took his Bolt from his "blue sky" meeting in Culver City to Ventura Beach. Back up to Maple Bay, BC although I ran out of brake disc after Astoria, Oregon. I applied for long distance award from local club and will as well for long distance award from provincial British car club (over 3,000 miles).

Thanks for the great welcome back.
Did you get my private messages? Seems like that didn’t work or I did something wrong.
It’s been a while since I have worked on my TR7 V8 with any great enthusiasm apart from general servicing. If the car is to live on its time for a full ground up rebuild, back to bare metal.
The biggest thing to happen to the car is the engineers report, RTA engineer passed it and Vic roads accepted the modification to the registration this was an awesome moment for the car and her owner.
I have a few plans for lots of little up grads looking forward to input and advice.
Top

Hi Rod
My 7V8 is taxed all year round in the U.K. It only goes out on dry saltless roads in the winter and dry ones in the summer. 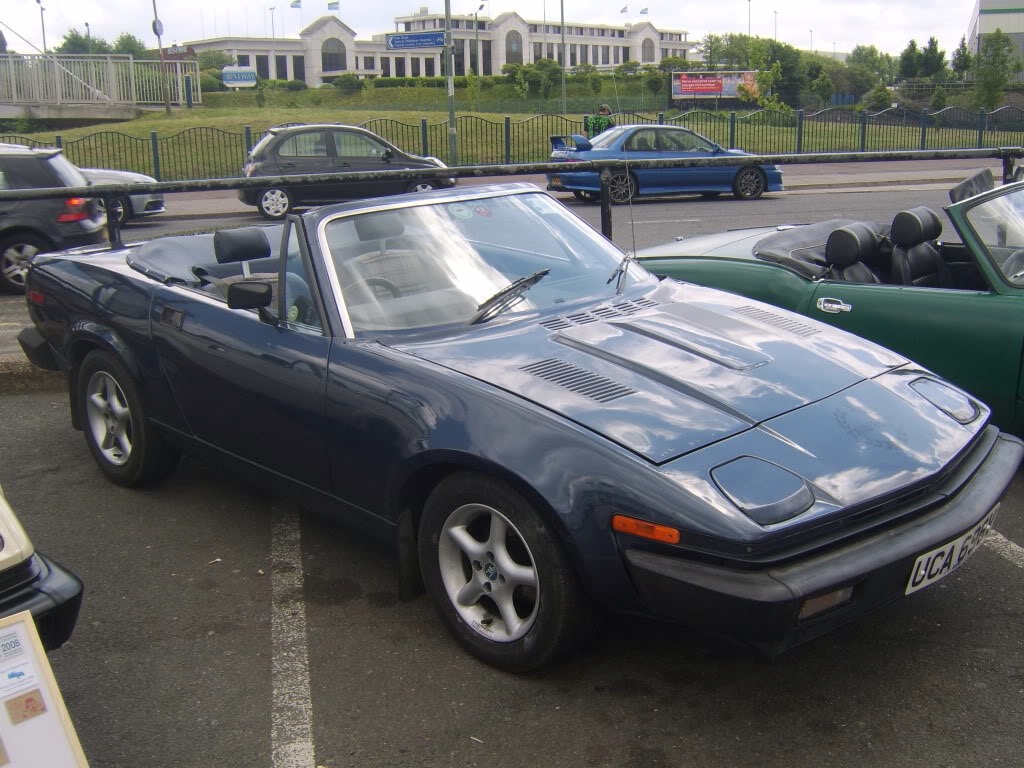 I have owned the car for almost 12 years and the time it was what was left of a Californian EFI spider that somebody painted white. I found black paint in the boot and under the white if you chipped away at it. Also there was a EFI TR7 2 Litre engine under the hood. Due to circumstances I have no idea about it lost any chance of ever hold onto its origins all this happened long before I purchased it. I only got to purchase the car because nobody wanted it. I got it at the time for what was the cheapest ever DHC on the market.

Now Its a 4.0 V8 with 11 years of wear and tear in Australia's harsh climate.
We had blown a bottom radiator hose 300 k from home. That day was 39 celsius. 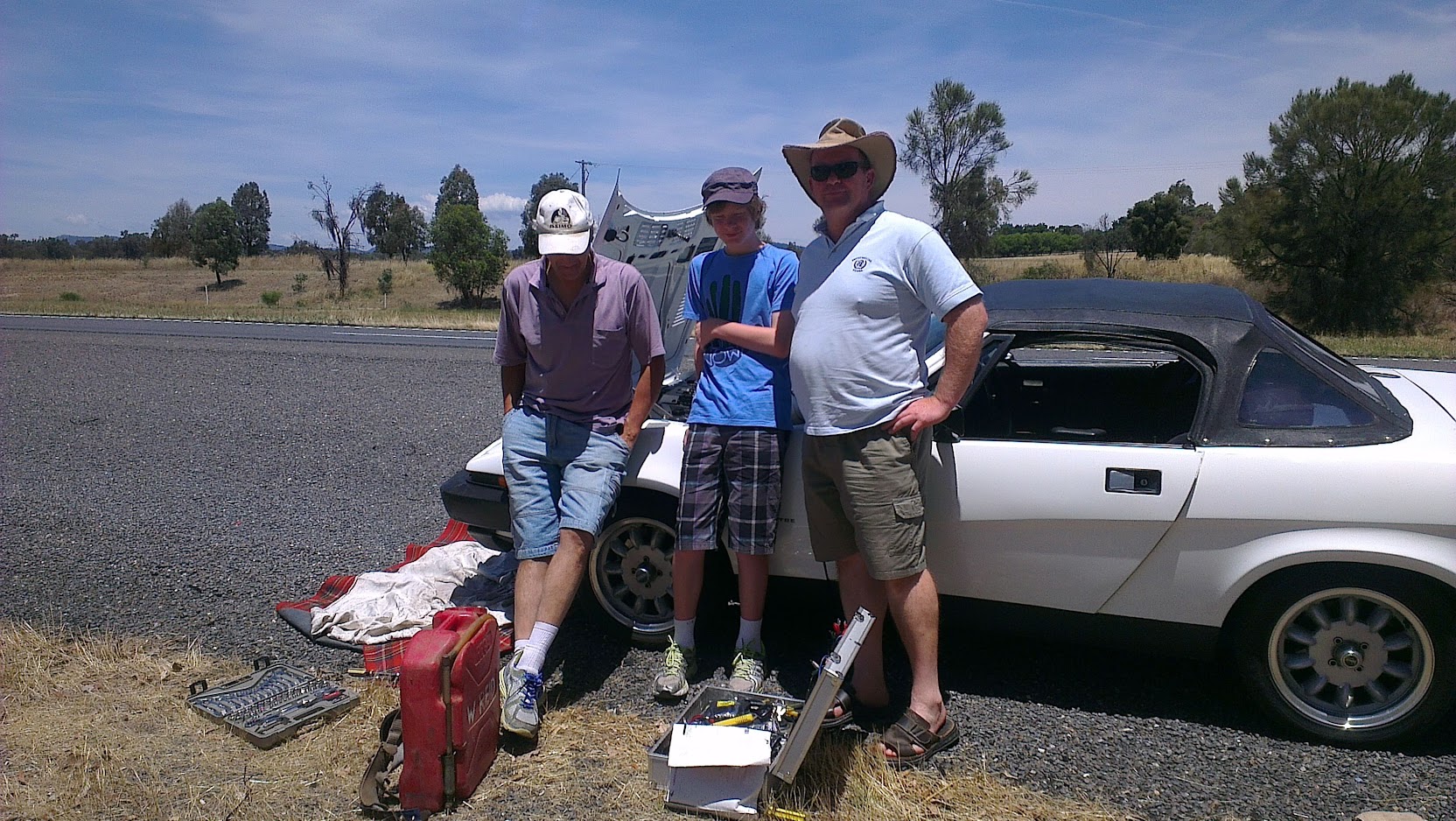 Welcome back Rod, good to see not everyone has abandoned the forum for Facebook's post and forget

Indeed most people use FB nowadays as it's quick and easy.
And you can ask questions over and over again as you can't find any previous answers

Looking forward to the cars progress!

I am a member of the face book Triumph Wedge Owners Association group also.
It just doesn’t work for me. Social media has destroyed that personal feel of friends sharing the same interest.
That’s why I came looking for my old forum. It maybe small but it’s where I will pursue my passion for TR7/8
Top

FB has its uses. It's mean for the flittering thought/picture of the day (amongst other less noteworthy applications) not for what a forum is for.

TorananrodTR7, in your first picture the alternator drive belt looks to be inside out?
Russ

I see what you mean. This was not the case and that motor is long gone,its v8 car now.

Hello Beans.
The Green convertible in your photo line up. Is that an original color? What is that color called?
Top

Hi Rod, hello from another forum user (and Facebook hater). I’m halfway through the restoration of my drophead and the installation of a v8. Looking forward to following progress on your resto.

Users browsing this forum: No registered users and 55 guests