Here’s where to discuss anything specific about your standard(ish) car or something that applies to the model in general.
Post Reply
22 posts

Over the last few weekends I have been re-installing the wiring loom and connecting everything up. That I didn't label anything when I took the loom out over 20 years ago hasn't helped, but I believe I have done a good job getting everything back in and retro-labelling using the circuit diagram and a spare loom. I'm not rushing this job, as I want all the electrics to work before refitting the dash etc.

So, after much repairing of the loom I applied some 12v power from a battery today (the engine isn't in, so all engine wires etc were insulated with tape to stop any shorting). My view was that any number of things would happen, namely (a) nothing would work (b) it would blow all the fuses, catch fire and burn my garage down

(c) some things would work and (d) it would all work perfectly. Clearly (d) wasn't really going to happen, but here's what did:

Working but weirdly: Numberplate/licence plate lamps in the boot/trunk lid (dim), hazard lights (they did work for a while but now don't), headlamp lift motors. One is always up and doesn't move, the other goes up when it should be down and vice versa

I have listed these just in case someone with better knowledge than me may say "aha, some of those things share an earth or +VE feed in common".

One other thing, I have a mystery around the low fuel delay unit but I may be confusing it with something else. I have four wires, the colours of which according to the book correlate exactly with this part. However they are after the grommet on the loom which exits I think in the same hole used by the wires which feed the low brake pressure switch which screws into the bottom of the brake master cylinder. That would position the low fuel delay unit somewhere in the engine bay, right in the corner of the front bulkhead/RH inner wing on this RHD car, roughly opposite where the washer pump goes on the other side of the car. I almost remember some rusty thing being there when I took the car apart. There are correlating holes there for it, or something similar.

However, everything I read says the low fuel delay unit is fitted somewhere inside the car, perhaps underneath the instrument cluster.

So, am I confusing two parts?

Man, you may have saved my sanity there! Many thanks.

I am a bit confused again. Easily done with me!

Lots of threads talk about a voltage stabiliser which smooths out the spikes in the 12v supply to the dash, and supplies 10v. It looks exactly like the fuel low delay unit, UKC7096, according to the photos. However it strikes me that both would appear to do the same thing. Are they the same thing on my car?

Does my car need both, in which case does anyone know the p/n for the stabiliser? Or does UKC7096 serve both purposes?

Can't help you at the moment as my computer crashed last week. So can't check my pictures. Hopefully it'll be back and running soon.

Beans wrote:Can't help you at the moment as my computer crashed last week. So can't check my pictures. Hopefully it'll be back and running soon.

johnnyj wrote:I am a bit confused again. Easily done with me!

Lots of threads talk about a voltage stabiliser which smooths out the spikes in the 12v supply to the dash, and supplies 10v. It looks exactly like the fuel low delay unit, UKC7096, according to the photos. However it strikes me that both would appear to do the same thing. Are they the same thing on my car?

Does my car need both, in which case does anyone know the p/n for the stabiliser? Or does UKC7096 serve both purposes?

I even found a picture of the inside of the delay unit taken by Odd Hedberg.

Russ, thanks so much for taking the trouble to explain that, and for illustrating with photos.

The low fuel delay unit you picture is exactly what I remember, and I really wish I could locate it in my shed! It must be the only part which has gone missing in 20+ years of storage and of course it is the one thing I just cannot locate anywhere. But I have dropped a line to the kind folk at S&S.

Just one oddity. On my car it was 100% located in the engine bay, on the driver's side, corner of the bulkhead (so behind the servo). The wires in the loom are on the outside (engine bay) side of the grommet; there are holes for it in the bulkhead and the wires reach there exactly, plus won't reach the instrument cluster.

Just found this picture which shows where the low fuel delay unit was fitted on my DHC when I first got it. The car had been through a complete respray to change the colour. Seems they didn't know where to put it back afterwards!
Its now back where it should be on top of the instrument cluster.

Ha! On mine it certainly goes in the engine bay, but perhaps I should follow suit and put it somewhere novel. I'm thinking attached to a bit of Dexion racking under the rear parcel shelf?

In all seriousness, I will certainly double check that I haven't made the wrong assumption about it being in the engine bay. I am sure it goes there but I will "idiot check" in the morning. As an aside, S&S are sending me a used one. Hooray for all the specialists who support our cars.

Thanks again for the info and photos. 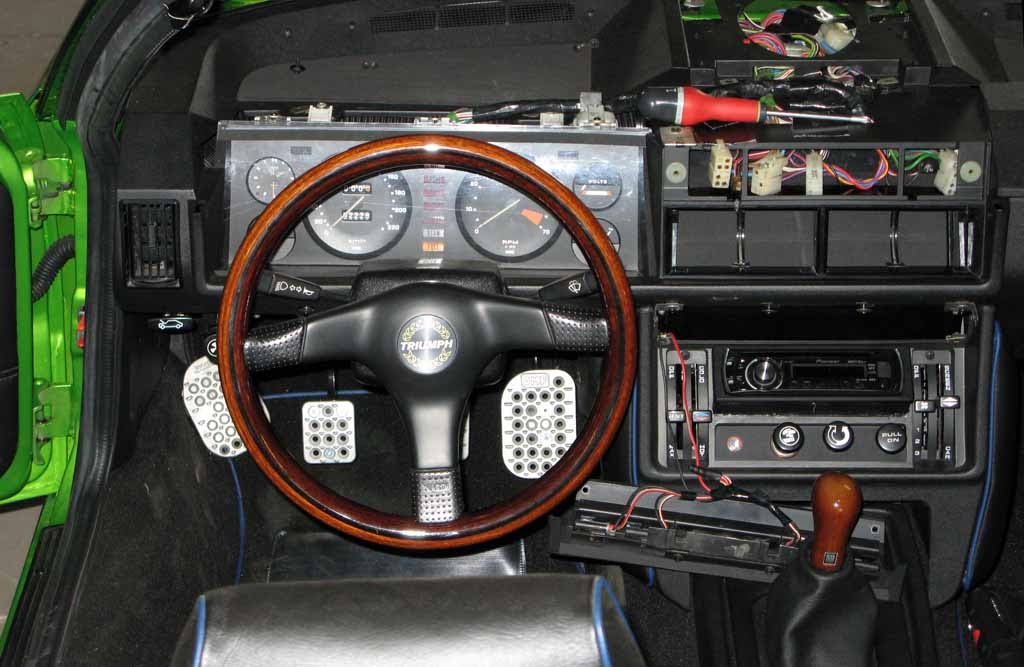 Beans is correct as usual. The low fuel delay unit has always been located screwed to the top of the instrument binnacle on all the cars that I have worked on. I have never seen it located either in the engine bay or under the dash.

Well, I am sure you're both right. I forgot to check today as I was too busy trying to get the headlamp lift motors to work! The R/H one goes up when it should be down, and down when it should be up; and the L/H one doesn't do much at all, really.

RE the fuel delay unit, I'll check again. But here's what I know: by referring to the circuit diagram, I have identified the wires in the loom which go to the delay unit. The colours and combos are an exact match. The four wires pass through a factory grommet on the loom (the same grommet shared with the brake pressure fail switch wiring) and therefore exit engine-bay side. There are two of those plastic captive nut things behind and to the left of the servo, right at the confluence of the R/H inner wing and the bulkhead and almost unseen as they are high up in the corner. And more than anything, I remember it being there. That said, my memory isn't what it was...

The fuel warning mechanism still works on mine, 2 miles warning before empty

Sounds familiar ... at least one thing on 't Kreng that works properly